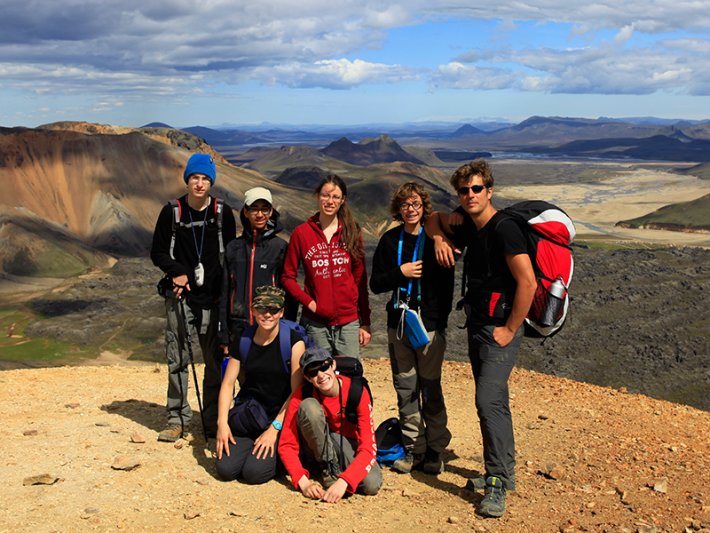 Spend two weeks in the heart of one of the most breathtaking islands on the planet. Iceland is a true book of geology, open sky, and an outdoor (...) Further Details

Spend two weeks in the heart of one of the most breathtaking islands on the planet. Iceland is a true book of geology, open sky, and an outdoor (...) Further Details

If you want to take part in an adventure that is part language exchange and part scientific research Scientific Research Participate in scientific research research programs. Help advance research on oceans to help us understand them better. Do this on our nature courses on dolphins and whales. , then this science Science La science est désormais l’affaire de tous. Découvrez la science d’une manière ludique et active. Nous vous proposons d’en découvrir plus sur nos expéditions à la voile, découverte du plancton. camp is for you! A fortnight spent in the heart of one of the most stunning islands on the planet, this trip will offer you the chance to learn about the world of scientific journalism. The camp will be conducted in English, and you will study themes such as glaciers, rocks, volcanoes, water, and climate change.

During this trip, you will learn and practice in English, the techniques of scientific journalism. By doing interviews with the locals, conducting experiments, writing photography essays, making short videos, and writing articles, you will study and advance the research done in the area of climate change and Icelandic glaciers. This way, you will be participating in searching for solutions to sustainable development concerning the effects of climate change on Earth.

Iceland is worth the trek to get there, for all the reasons that one thinks of when dreaming of going there but also for other reasons. Did you know that hydrogen technology is found in gas stations? It is quite rare when one compares this to Canada or France, Switzerland Vacation Camp
Valais
Switzerland

Every year the NGO Objectif Sciences International offers several science camps in Valais, Switzerland, on different themes (fauna & flora, architecture, palaeontology, geology, drones...) You will find, at the following link, more information about our nature camps. or the United States, which are long and far behind!

On the whole, the scientific and journalistic activities will be carried out in English. Other activities for relaxation and fun will be carried out either in English or French. However, meetings and interviews, discussions with other citizens and professionals on the island, investigations, and conferences given by the participants at the end of their stay will be all done in English. Daily posts written by the participants will be accessible on the internet and written in French for the portion destined to parents and friends, but scientific findings and journalism projects will all be written in English.

It is possible for younger participants to travel accompanied to all the main cities in the world (Rome, Geneva, Tokyo, Montreal and more). In order to take advantage of this system, please take note of the following: to participate in this trip, you must be able to reach Reykjavik airport. If you are coming from Québec, we strongly advise that you depart from Montreal Airport. If you live in Europe, we advise departure from Paris, Geneva, or London. For all other major cities in the world, the best choice would be to take a flight managed by an American company. In all cases, please contact the team in Central Europe that organizes the trip in order to choose the best departure time.

Upon Arrival in Iceland

The trip will begin in stages, either by bus or by daily walks with an educator responsible for up to five participants each. Public transport buses will easily carry all the material needed for this expedition (backpacks, tents and scientific material such as thermometers, computers, binoculars, cameras, video recording devices and others) as well as the personal belongings of each participants; clothing, cameras, and food (non-perishable and fresh produce). Accommodation will be in the form of camps.

The bus in Iceland is a dependable means of transport, in spite of its limitations in speed and is flexible concerning the stops made near the camp site. It will be our main means of transport. However, we will also be able to use 4x4 vehicles easily to access tracks in the centre of the Island, notably in the Fjallabak Nature Reserve.

Please note that disagreeable weather in Iceland is quite common: rain, wind, cold temperatures and even fog are common. It will be necessary to dress well and to follow the list of clothing requirements that will be given to you, and be aware of the changeability of the weather!

The expeditions will start from the southern part of Iceland. Numerous walking excursions will be organized in order to better conduct our expeditions on scientific journalism.

Be it about discovering the surrounding moonlit areas of Reykjavik or using the municipal geothermal pools (such as Reykjavik and Vik), each extracurricular or cultural activity will bring us closer to learning about scientific journalism.

Our itinerary will take us to the Skaftafell National Park, as well as to the small village of Vik, allowing us discover the geological beauties of the Basalt Columns, towering cliffs, as well as some superb and impressive glaciers.

When you return from the expedition and thanks to video-projection from the youth hostel in Reykjavik, you and your friends will be able to give some tutorials, discussing the fruits of your journalistic labour in English. The youth hostel is a place where many people of different nationalities meet!

Your mission, should you choose to accept it: to undertake an investigation, using scientific journalism, on glaciers, rocks, volcanoes, water and climate change, and you will be contributing to the advancement of the educational research program Research Program Collaborate with scientific organizations. Actively take part in participative science research programs. All this is possible with our plankton discovery sailing expedition. GEOCLIM.

Upon arrival, you will be split into several investigative teams and you will each choose a subject to study, the hotter the better, geo-thermally obliged! Each team will have ten full days, out of 15, to do their research and to communicate it in English.

This trip is part of a program created by Objectif Sciences International to develop the competences of future professionals, (you being one of them) in the field of scientific journalism.

The program will demand that your team ask relevant questions based on your observations of natural phenomenon during excursions and to be able to push the concepts further. You will keep your discoveries in a personal notebook that can be kept as a souvenir afterwards. Bit by bit, you will find a logical way to present your information in a way that is informative and entertaining such as a magazine article, a video report, radio show, or another way that allows the audience to understand your report.

The educators, geologists-hydrologists or scientific journalists will be there to explain the natural phenomenon. They will accompany the teams in an unbiased manner in the achievement of their quests. How to write and present your findings will be taught during the days when all the teams get together to discuss their findings and will be conducted in English.

Iceland is a land of fire and ice; an island that stretches into the Atlantic and that is sinking at an average of 2cm a year. The island is situated on two different tectonic plates: the European plate on the East and the American plate on the West.

Iceland represents a fifth of the area of France and it possesses the biggest glacier in Europe, the Vatnajökull, the size of the island of Corsica. The existence of five types of volcanoes, as well as volcanoes under the glaciers, gives the island an atmosphere and unique scenery that make it a geological wonder.

Nature reserves are well preserved and managed so that tourism doesn’t destroy the fragile soil of this land. Exploiting geothermal power for heat and electricity has made this island almost completely autonomous in its energy use. Prototypes of vehicles functioning on hydrogen are already being used on Icelandic roads.

Extraordinary birds coexist with lambs, reindeers, Icelandic horses, snow foxes and seals. Nests of puffin penguins can be seen from the cliffs of the little village of Vik.

When is the Iceland camp this summer? is it already fully booked? How much does it cost? Where is the link to actually apply on the website? Thanks