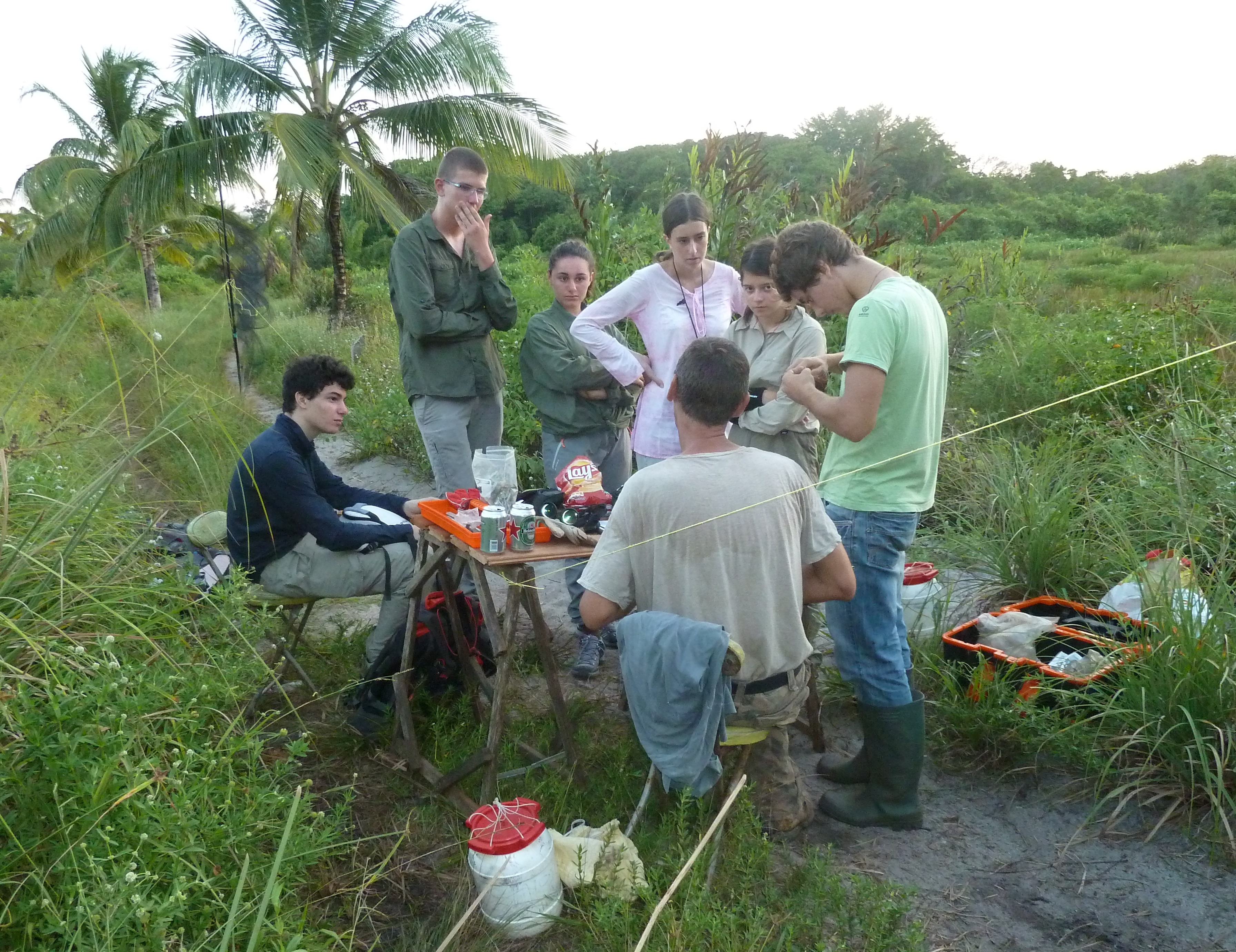 All Through the AmazonLevels 3 and 4

All Through the AmazonLevels 3 and 4

Home > Our Camps > All Through the Amazon

Does the Amazon make you dream? Well, your trip will unfold right in the heart of the Amazon rainforest, in a safe and protected area. You will be immersed in one of the world’s richest countries in terms of biodiversity.

Join scientific works on local flora and fauna to learn about, and protect this diversity. In fact, this diversity is under threat: logging, urban and road development, and gold mining are all posing a threat to the lung of the Earth.

On this expedition, you will live safely and in harmony with the natural surroundings, following real research protocols and identifying flora and fauna. You will also be developing Objectif Sciences International’s PERCEPTION Research Program Research Program Collaborate with scientific organizations. Actively take part in participative science research programs. All this is possible with our plankton discovery sailing expedition. .

By communicating and promoting the wealth contained in the forest, it is possible to raise public awareness and change attitudes. The impact of your stay will by far exceed the duration of your trip!

French Guiana is an overseas department of France, with an area of more than 90,000km², situated in South America between Suriname and Brazil. It is the only region of France situated on the South American continent. In 1988, it had a population of about only 90,000 people. Today, it has just over 250,000 inhabitants. It has one of the lowest population densities of the South American continent, and undoubtedly one of the lowest in the world. This trend is amplified by the concentration of people on the coastline and along the rivers, leaving the interior of the country devoid of inhabitants.

French Guiana is bordered by Suriname to the west (formerly referred to as Dutch Guiana) and Brazil to the east and south.

It is a tropical rainforest that is ecologically Amazonian, historically French, and politically European.

With 8 million hectares, the forests of French Guiana constitute France’s largest area of tropical rainforest. That is, one third of France’s forested area that is characterized by its extreme biodiversity. In fact, more than 1,500 tree species, some of which have only been found in that territory, thrive there. 5.3 million hectares of forest are managed by France’s National Forests Office (ONF), the rest is managed by Guiana Amazonian Park, one of the ten national parks of France.

French Guiana has the necessary legislative and regulatory foundations to respond to these issues and to develop a forest policy, with the local people and communities, that are certified for sustainable forest management, such as through the PEFC. With a surface area six times smaller than that of metropolitan France, French Guiana has about ten times more (identified) species of animal, including insects and spiders. It is an ideal land for nature lovers and those interested in observing animals.

During our hikes along the marked trails, we can observe different species of trees, such as the angelique, bagassa, achiote, acapu, or even the strangler fig, which has the distinct feature of literally colonizing another tree. The strangler fig’s roots, draped on the outside of its trunk, form a genuine cathedral of wood, climb and then encircle the trunk of another tree which eventually dies. Equipped with binoculars, we can try to spot out some of the 720 species of birds, including more than 35 species of hummingbird, but also 480 freshwater fish, 5,200 plant species and 186 mammals... If we are patient, we might see some tapirs (called maipuri in French Guiana), armadillos, deer and, who knows, maybe some jaguars. It is true that some animals are less loved by the population. Snakes, spiders and amphibians have a bad rap like almost everywhere else in the world, but don’t worry, their shy nature means encounters with them are rare. During the day, we set out across the lush vegetation to carry out research protocols developed with our partners. Throughout the entire trip, you will learn to familiarize yourself with your surroundings, operate measuring instruments, analyze your observations and share your experience with the general public (e.g. through a lecture or photo exhibition).

The “Up amongst the Trees - French Guiana” trip is part of the PERCEPTION Research Program Research Program Collaborate with scientific organizations. Actively take part in participative science research programs. All this is possible with our plankton discovery sailing expedition. , which aims to better understand the relationships between all the living creatures within an ecosystem, with the objective of proposing innovative ecological solutions for agricultural production and forest management. Essentially the forest is also a resource for humans. Well-managed, it provides us with construction materials and energy, but doesn’t it also provide us with food and medicines? In many countries, trees compete with agricultural land, and the country’s survival is sometimes synonymous with deforestation. So, is it possible to have farming in a forest? Could rich ecosystems and food sources coexist without affecting biodiversity? Besides, why wouldn’t we witness this biodiversity for ourselves and see how to understand it better, to protect it better? That is what this project aims to highlight through participatory research, making us actors in our own responses: experimenting to understand, and exploring to learn.

When you arrive, we will take the time to discover the city of Cayenne, the capital of French Guiana. Then we will head out to conquer “deep” French Guiana. Most of our days will be spent in the forest and many of our outings will be done on foot, so opt for trousers and closed-in shoes. There is a chance we might have to use canoes if the roads are not in use when we are travelling by car. Be aware that occasionally, going up the rivers in a canoe is the only means of moving further inland, other than by aircraft. The journey is carried out in wooden or aluminum canoes, equipped with an outboard motor, which can accommodate 8 to 14 passengers. We are in contact with a local business that regularly works with researchers from around the world and is used to transporting personnel and equipment. At each nightly resting point, toilets as well as one or more water taps will be available. Regarding meals, we will bring picnics if we head out for a full day, and at night, depending on where we find ourselves, we will enjoy traditional meals like Awara broth, which is a typical Guianan stew, or other simple but delicious meals. It is important to bear in mind that French Guiana has diverse influences, including French, Creole, Brazilian and even Chinese. Forget any preconceived notions, not every dish is spicy! In terms of external communication, you can bring your mobile phones. The two main mobile network operators available are Orange Caraïbe and Digicel. Nonetheless, bear in mind that SIM cards are not compatible, so you must unlock your mobile device before departure if you simply wish to purchase a new SIM. However, the network quality is by no means guaranteed during this expedition. For this reason we are equipped with a satellite telephone in case of any problems. This will be useful in giving news to our loved ones every day from the logbook we keep. The logbook will be on the internet, accessible to everyone. An internet connection will occasionally be available, depending on the different stages of the expedition.

A list of items to bring will be sent to all participants. (Clothing, medications, equipment, etc.)

During this expedition, there is no fuss, so forget your conventional bed and four-star hotels. For the majority of nights, we will all sleep in the same “carbet”. These are hut-like wooden shelters without walls, typical of American Indian cultures, where we will be able to hang our hammocks fitted with mosquito nets. For hundreds of years, Guianans and Brazilians alike have used them for shelter. Their large shady area allows some of the cool night breeze to flow through while providing protection in case of rain. 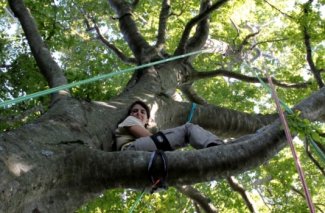 Solène Touzeau After completing a Masters in Biology of Organisms and Populations from the University of Burgundy in 2011, she joined the Objectif Sciences International NGO in June 2012, and became a Scientific Educator on the Biotech Connection camp. In 2013, she accepted a position as Manager of the PERCEPTION research program. Since then, she has coordianted different camps, such as “Up among the Trees”, “Along the River” as well as “The Sun and its Secrets”. The first expedition of the PERCEPTION program is a test expedition in French Guiana. Registration is already open and the number of places for this first expedition is limited!

Q1: Is there a risk of insect or animal bites and, if so, what are they?

Mosquitos: Mosquitos are present but, contrary to popular belief, there are far fewer in the forest where we will spend much of our time. Bring mosquito repellents and wear long sleeves and long trousers in the evenings. Snakes: Relatively few species of snakes in French Guiana are venomous (coral snakes and rattlesnakes) and the legendary anaconda is only a potential danger to humans if it is above 5 meters in length. A degree of caution and care needs to be taken, although snakes generally only attack if they feel threatened or if they are stepped on, just like anywhere else in the world. Spiders and scorpions: Not only are tarantulas and other scorpions not found at the bottom of every pair of shoes, but they are also rarely aggressive, unless they feel threatened. Developing good reflexes will be part of our daily life. Ants: Ants are more bothersome, to the extent that there are lots of them and their bite can be slightly more painful than ants found in France. It is preferable to wear closed-in, high-top shoes.

Q2: Are there any safety hazards with respect to the water that is consumed on this trip?

Tap water on the coastline and in the main coastal towns extending inland is drinkable. In the forest, bring water bottles and water purification tablets (Micropur, for example) just in case.

Q3: Which vaccines are compulsory?

Yellow fever vaccine is compulsory. For those who have already had it, the protection lasts at least 10 years. (A yellow fever vaccination certificate is required when entering French Guiana.) Vaccines for Hepatitis A and B are advised, and it is preferable to ensure that your booster vaccines for tetanus and polio are up to date. For our trip, the typhoid vaccine, rabies vaccine and antimalarial treatment are strongly recommended.